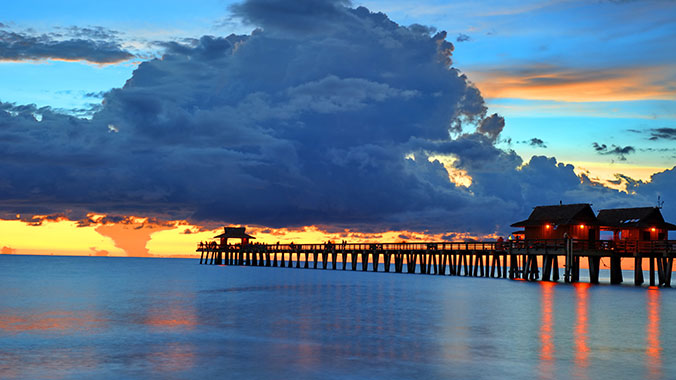 The Naples Pier in Naples, Florida is a popular destination for both tourists and locals alike. At the historic Naples Pier, there is a little something for everyone. Concessions are open from 9 in the morning to 5 at night so don’t expect to find any food if you are in for some late night fishing. During the day, the beaches are peppered with loungers and tanners. There are many volleyball nets set up along the pier, adjacent to its large concrete posts. Here, volleyballers bump, set, and spike next to the historic Naples Pier. The pier is also a popular spot for fisherman, who like to stay high and dry while they cast their line into the Gulf of Mexico.

The Naples Pier is not just a great destination for locals and tourists. It is also rich in history and has endured many catastrophic events throughout its long lifetime. Surprisingly, Naples’ very first post office was built on the pier, although it was destroyed by a fire in the early 20th century. While the pier survived this fire, it was brutally damaged by hurricanes in the future. But the pier always bounced back in spite of the challenges it faced. We can all learn a rich lesson from the pier’s astounding resilience.

The Naples Pier is located in the Gulf of Mexico at the intersection of Gulf Shore Boulevard and 12th Avenue. Nearby is Artis Naples.

Copyright © 2020 MaxLiving®; Align Your Health®; 5 Essentials®. All rights reserved. This website contains proprietary logo’s and brand information of MaxLiving LP. No part of this website or information may be used, reproduced, redistributed, or published in any form without prior written permission from MaxLiving LP. All information, services, benefits or other messages may be changed by MaxLiving at any time without prior notice or explanation to the user.
Accessibility by WAH